At Norfolk - by Robert King - Gouache 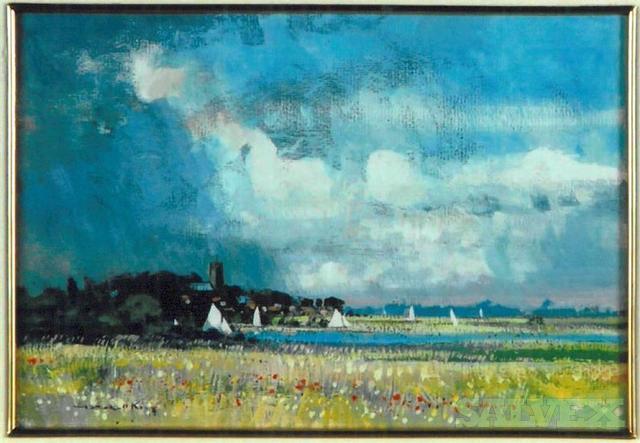 ATTENTION: This item is no longer available.
VIEW AVAILABLE ITEMS

This Painting "At Norfolk" by Robert King was part of a theft recovery.  We are collecting bids on this item to obtain a financial recovery for the insurance company.

Robert King was born in Leicester in 1936, where he studied at the College of Art between 1952 and 1954, following which he served in the army in Egypt for two years before resuming art school in 1957. He now lives with his wife Chrissie in a coastguard cottage overlooking the Solent. Robert's First solo exhibition was held in Leicester in 1970 and was followed by success at the Royal Academy and Royal Institute in London and the Paris Salon. He was elected a member of the Royal Institute of Painters in Watercolour and he has exhibited on many occasions at the Medici Gallery. Robert became a member of the Royal Society of Marine Artists in 1985 and has exhibited in the USA, Canada and Jersey. He now exhibits in London and throughout the UK showing subjects for which he is best known - beach scenes, the Solent, Venice, the north Norfolk coast as well as interior and figurative scenes. He is a painter in oils, watercolour and gouache also etching and lithography.

Robert King enjoys working in oils, water colours, gouche and pastel. His subject matter is diverse, and he is equally acclaimed for his beach scenes, the Solent (which he looks at daily from the windows of his coastguard's cottage), Venice and the North Norfolk Coast. His figurative paintings of interiors and the nude are greatly admired and sought after by collectors, they convey warmth and intimacy to the viewer without loosing his superb sense of colour, composition and light. His work is to be found in major collections worldwide. A member of the Royal Institute of Painters in Water-Colours since 1976 and a member of the Royal Society of Marine Artists since 1985.

Other Listings in Consumer Goods